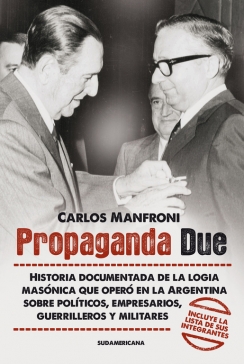 A documented history of the Propaganda Due lodge, its ties, and its handling, step by step, of the events in 1970s Argentina. This book reveals a complex web of relationships between banks, intelligence services, military men, guerrillas, mafia and Islamic terrorist organizations whose actions are coordinated by the Propaganda Due lodge, born in Italy but now present in several countries, primarily in Argentina. Based on the Italian Parliament’s Investigative Commission into the Masonic Lodge, Propaganda Due discloses copies of unpublished documents and photographs, including a list of the members of P2.

Carlos Manfroni was a member of the Group of Experts for the Organization of American States that wrote the Inter-American Convention against Corruption. He forms part of the Commission for Human Rights of the Lawyers’ Association of Buenos Aires.