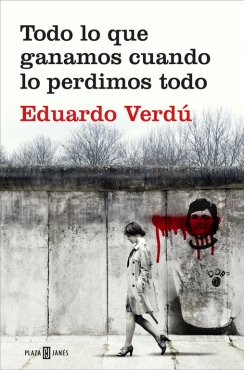 Eduardo Verdú
What we won when we lost everything

A trapped footballer, an abandoned wife and an all-powerful secret service come up against each other in this moving and political drama full of suspense.

Lutz Eigendorf, a famous football player leaves it all behind: his wife, his two year old daughter, his job and his homeland of Communist Germany; all in search of freedom. Left on the other side of the wall, Lutz’s wife and daughter face the consequences for his impulsive act. From West Germany, the footballer will fight to reunite his family, but faces an unexpected betrayal by a close friend. A suspenseful story, narrated with a unique and personal voice, which masterfully portrays the human condition, its conflicts, doubts and motivations. Based on real-life events, it is written by a journalist who undertook exhaustive research into the main protagonist and the political circumstances of The Cold War and the Communist Germany.

Eduardo Verdú (Madrid, 1974) is a journalist and writer. He has worked for Canal Plus and Cuatro as well as collaborating with publications like Marie Claire, Woman, EPS and Huffington Post. He was a regular columnist for the Madrid section of the El País newspaper for over ten years.