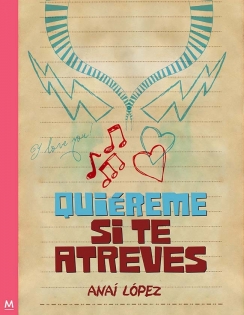 Anaí López
Love Me If You Dare (Elena's Trilogy #2)

Like all teenage girls, Elena has to deal with the difficulties of being a teenager. The trilogy treats areas like teen culture and the hardships of growing up very adeptly. Elena is 15 years old and as if the book were her diary, she shares with the reader how she develops her identity.

Through this one teenager, each reader will see themselves at the same age and with the same doubts, changes of humor and see similarities in the problems that she has with school, alcohol, family, friends and boyfriends with their own lives.

Anaí Lopez likes to write diariesthe most , as she has done since she was thirteen. But because she likes fictional characters almost as much as those in real life, when she grew up she decided to become a Film and TV writer. After studying in Madrid and trying her luck in Barcelona, she returned to Mexico where she has worked on TV series like Bizbirije, El diván de Valentina, Fonda su silla etc. She is the author of the bestselling Quiéreme trilogy.