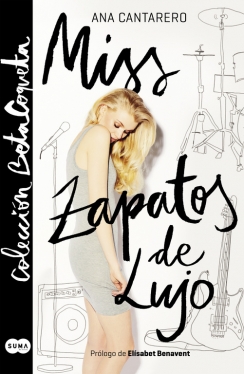 A story of an unattainable girl, a picture-perfect boyfriend, the adventures of a rock band, and secrets kept under lock and key. If life were chick lit, fashion writer Marta García would have been promoted at the women’s magazine where she works and wouldn’t have to leave her job to be the slave of an egocentric singer. And Xavier, her boyfriend and coworker, wouldn’t have slept with Erica—their boss—or at least she’d have met a spectacular millionaire in a charcoal gray Armani suit who would take the sting out of it. But it seems life isn’t a novel and fate has something else in store for her. After her first interview at Sound Music, a record company, the girl with the luxury heels runs into Nick Mendoza, a superhot... bad boy.

Ana Cantarero (Madrid, 1974) holds a degree in Psychology from the Universidad Complutense in Madrid. For ten years she wrote articles about sexuality for the magazines Bravo and Quo.