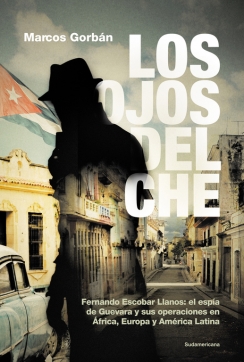 The incredible life story of “Che’s Eyes,” Ernesto Guevara’s most trusted man, whose mission was to pave the way for him in his travels throughout the Americas, Europe and Africa.   After half a century of silence, Fernando “Eyes” Escobar Llanos tells us how he met Che, describes some of the missions he undertook in his name over three continents, explains why the revolutionary leader nicknamed him “the invisible man,” and how he became the leader of a group of fifty Argentine communists who traveled to Cuba for military training. This fascinating and previously unknown story is also a highly personal journey for the author, whose search for the truth about “Che’s Eyes” ends up leading him to discover secrets within his own family, which is intimately linked to the Argentine left and the country’s political ups and downs.

ARGENTINA – Marcos Gorbán (Banfield, Argentina, 1968) is a journalist and a television producer (Gran Hermano, Operación Triunfo, Talento Argentino, and Combate, among other entertainment and documentary programs). He is chaired professor of Television and Audiovisual Production at the Universidad de San Andrés; he also gives conferences and leads training courses in almost all of the Argentine universities.