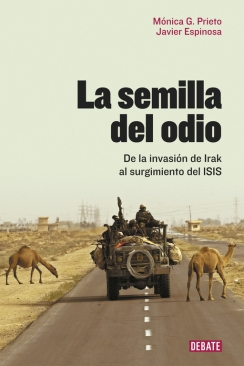 The illegal invasion of Bagdad in 2003 and the following misgovernment had the people of Iraq up in arms, but also revived the sectarian hatred that was buried during Sadam Hussein’s dictatorship. The Shiite majority’s rise to power, repressed by the Sunni minority for decades, and the invaders’ supposed impunity stoked the flame of a nationalist insurgence, who in their fight against foreign forces formed alliances with jihadists, who themselves are more inclined to spread terror with suicide bombings.

Javier Espinosa and Mónica G. Prieto carry out an exhaustive review of a decade in Iraq, one of the most troubled areas of the world, as they reconstruct, through intense and heart-rending reports, the steps that led to a whole region being held hostage by Iraq’s Islamic State, the origin of ISIS.

SPAIN – Mónica G. Prieto (1974) is a Spanish reporter who, since 1996, has covered armed conflicts in the Caucasus, the Balkans, the Middle East and Central Asia, including the wars in Chechnya, Macedonia, Afghanistan, Iraq, Gaza, Lebanon and Syria. She has been a correspondent in Rome, Moscow, Jerusalem, Beirut and Bangkok, although her work has been primarily focused on the Middle East, where she has worked as a reporter for 12 years. Her work has been honored with the 2016 Julio Anguita Parrado International Journalism Award, the 2013 José Couso Journalism Award, the 2005 Dario D’Angelo International Prize, and the 2011 José María Porquet Digital Journalism Award, among others.

SPAIN – Javier Espinosa (1964) is one of the most prestigious and well-known Spanish reporters of his generation. Throughout his career he has covered conflicts in Angola, Sri Lanka, Yugoslavia, the Rwandan genocide, Sierra Leona, the Gulf Wars, the invasion of Iraq, the offensives against Gaza, the war between Hezbollah and Israel, and the Syrian conflict, as well as prominent events including African famines, the Arab Spring and the end of apartheid. He was been awarded the 2012 Bayeaux Award for War Correspondents, the France Ouest Award (three times, 1999, 2005 and 2006), the King of Spain Prize (2000), the Cirilo Rodríguez Prize (2005), the Manuel Leguineche Award (2011), the Miguel Gil Prize (2012), the José Couso Prize (2014), the Manuel Vázquez Montalbán Award (2014) and the 2014 Reporters of the World Prize, among others.