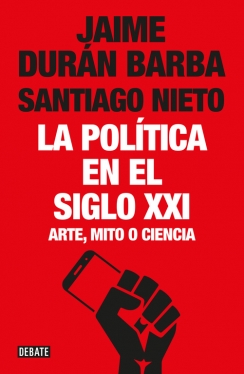 Jaime Durán Barba and Santiago Nieto have been surprisingly successful across Latin America with their provocative and innovative election campaigns. Always far from being politically correct, this book analyses the changes that society has undergone to help us understand this new era. They explain why the traditional system has collapsed and why to make it in politics you need to get past the myths and not fall into the traps of outdated analysis and obsolete models.

They argue that politics is suffering a representational crisis, as the power that voters usually wield is curated through their mobile phones in this era of technological revolution and of historical awareness. They debunk the myth that the electorate is obedient and easily manipulated and the lies and prejudices of a lot of traditional politicians who don’t understand that public opinion is uncontrollable.

After more than thirty years orchestrating electoral and governmental media campaigns, Durán Barba and Nieto have changed the way of interpreting the relationship between voters and politics. With a mix of theories from contrasting schools of thought, solid evidence and full of juicy anecdotes gathered from their time on the battle field over the last few years, Politics in the 21st Century is a must-read and an essential book to understand the times we live in.

ARGENTINA – Jaime Durán Barba is one of the founders of political consulting in Latin America. He studied law, philosophy, sociology and history and has been the Director at the Latin American Institution of Social Sciences (FLASCO) and an Ecuadorian presidential minister. He was awarded Ordem Nacional do Cruzeiro do Sul in the rank of Gran Cruz by the Brazilian government. He started his career as a consultant in 1980 and funded and led the survey company Informe Confidencial until 1998. He is also a professor at George Washington University, a member of the Club Político Argentino and a columnist for the Buenos Aires newspaper Perfil. Currently he advices candidates and heads of state across several Latin American countries. He has published more than ten books Mujer, sexualidad, internet, política and El arte de ganar (Debate, 2011), both as coautor with Santiago Nieto, and Cien peldaños al poder, alongside Joseph Napolitan.

ECUADOR – Santiago Nieto is a political consultant and an investigator. He has more than twenty years working on election campaigns and media strategies for governments and the stody of public opinion in Argentina, Mexico, Guatemala, Paraguay and Ecuador. He directs the firm Informe Confidencial, experts in tracking public opinion and is a professor at George Washington University. He has led courses and seminars across many of America’s academic institutions.