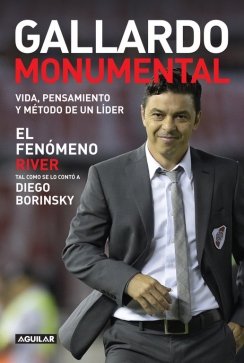 Marcelo Gallardo was the only man in the history of the River Plate Football Club to win international titles both as a player and as a coach. This book recounts Gallardo’s year-and-a-half run as the coach of River (from June 2014 to November 2015), based on his testimony and that of his coworkers. It also takes the reader to Gallardo’s infancy, his boyhood experiences, his three periods as a player with River, the two World Cups he took part in, and his time playing in Europe.

Diego Borinsky holds degrees in Biology (UBA, 1992) and Sports Journalism (DeporTEA, 1992). He works at the magazine El Gráfico since 1993. He is a radio correspondent for Cadena 3, a columnist on Fox Sports. He has traveled as a special correspondent to the 1998, 2006 and 2014 World Cups.