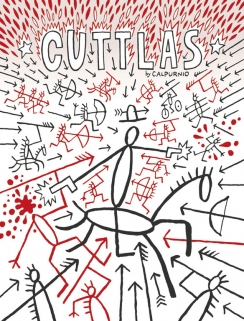 This book is a compilation of the best of “good ole Cuttlas.” Created by Calpurnio, one of Spain’s most important illustrators and cartoonists. Cuttlas the stick-figure cowboy has been an essential character in Spanish comics for more than thirty years. Accompanied by his inseparable friends Jim, 37 (an alien), Juan Bala, Kraftwerk (his favorite band), and his girlfriend Mabel, Cuttlas faces up to Jak the Villain, the Indians, and many more dangers in a Far West where action, romanticism, absurd humor and a certain metaphysical slant come together in unique, inimitable style. Cuttlas has appeared in numerous prestigious Spanish outlets, and his minimalist look has made him immediately recognizable to an entire generation. This cowboy is so popular he’s been brought back from the dead twice now.