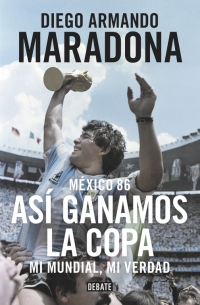 Thirty years from those magical plays, and after a life in sports marked by controversy, Maradona tells for the first time, in the first person, the untold stories behind that one-of-a-kind World Cup. In this book, he tells us about each and every game and what happened afterward in the locker room, but also the months leading up to the World Cup. He also explains the mystery behind “El Gran Capitán” Passarella (’78 World Cup Champion) leaving the team, the strategies and tactics that revolutionized the game, the public’s hostility, his relationship to drugs: the clean World Cup, the “final” with England, the Hand of God, and the best goal in football history.

Diego Armando Maradona is one of history’s greatest soccer players. A figure who is always controversial because of his public statements, he participated in four World Cups with the selection of Argentina.

Daniel Arcucci covered the Mexico World Cup and interviewed Maradona more than 150 times. His books To meet Diego and I am the Diego of the people were both best sellers in Argentina. Since 1997 he is the sub-editor of La Nación newspaper.