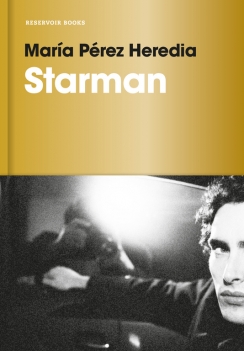 A magnificent exploration of fame and emptiness with a very masculine, enigmatic and alluring protagonist: a rebellious young man who only wants to run away from his success and celebrity.   Clay Cassidy has an uncertain future. He is working as a waiter in a café in Los Angeles when a Hollywood agent offers to make him a star. His rise is meteoric after he films a romantic comedy that is the hit of the year, and he steals the heart of an “it girl”. All of a sudden, everyone wants to know who he really is, and all the details of his high-profile celebrity romance.   When Clay wins the Oscar for Best Actor, he feels he has to run away from it all. The media spends weeks fixated on his disappearance, while his friends, family and girlfriend try to keep their worries under control. Where is Clay Cassidy?

María Pérez Heredia (Zaragoza, 1994) is one of the most promising young voices in Spanish prose. She has published short stories, articles of literary criticism and another novel, Esos días raros de lluvia. Starman consolidates her masterful technique of dialogue, interior monologue, documentary, reportage, flashbacks and flash-forwards.