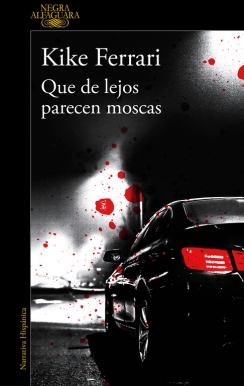 Kike Ferrari
From far away they look like flies

A dark novel written by an author as talented as it was a surprise when he won the Casa de las Américas Prize (Cuba) and the Best First Work Prize at the Gijón Dark Week (Semana Negra de Gijón) and who, according to The Wall Street Journal, is Argentina’s latest literary revelation.

Mr. Machi is the perfect example of both success and contempt. The owner of a small empire in Argentina, he made his fortune under the military dictatorship and then secured it under the first two democratic governments by marrying a woman with a double-barreled surname and who is the daughter of a land-owner. Machi is surrounded by beautiful women who bow to his every need; he has a BMW, a collection of three hundred ties and 10 million dollars in the bank. Cocaine and ‘blue pills’ help distract him from his wife’s many complaints about his infidelities and the failings of their children – who are so different to him – and above all help him to forget his enemies. And Machi has a lot of enemies; although he thinks of them more as insects and that “from far way, they look like flies”. Until one day, when someone hides a body in the trunk of his BMW and another story suddenly begins.

With this explosive and original novel, Kike Ferrari, a metro cleaner in Argentina, commanded the attention of readers and the international press. This brutal and vertiginous work deals with the social, economic and urban devastation of a post-dictatorship Argentina and makes the unforgettable Mr. Machi a character which is emblematic and representative of ruthless neoliberalism everywhere.

Kike Ferrari (Buenos Aires, 1972) grew up in Almagro, Buenos Aires, where he now lives with his wife and children. He was part of the literary fanzine Juguetes Rabiosos and is now an editorial committee member of the magazine La Granada. He has been a collaborator for magazines such as Sudestada, Marea Popular (Argentina), Casa de las Américas (Cuba), Visión y Fiat Lux (Spain); a columnist for the websites Sigueleyendo (Spain), Hermano Cerdo (Mexico), Cosecha Roja y Notas (Argentina). He also writes frequently for the magazine of the metro workers of Buenos Aires, of which he’s a founding member. He has won prizes from Casa de las Américas (Cuba), the National Arts Fund (Fondo Nacional de las Artes) (Argentina) and from Gijón Dark Week (Semana Negra de Gijón), amongst others. He has published four other works: the novels Operación Bukowski (2004) and Lo que no fue (2009); the collections of short stories Entonces sólo la noche (2008) and Nadie es inocente (2014) and the compilation of articles Postales rabiosas y otros juguetes inesperadamente literarios (2010). Ferrari currently works as a night cleaner on the Buenos Aires metro at the Pasteur-Amia station on line B. In the 90s, he was deported from the USA where he and his wife were trying to find work.