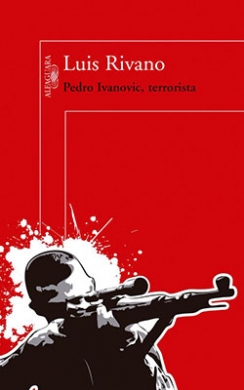 Is it possible to justify the excessive actions of a man acting according to his own personal motives? Is forgiveness feasible if he was not in his right mind when he committed the acts? After the sniper Pedro Ivanovich is arrested, a medical team carries out a long incisive interview with him in order to determine his mental state. Are the arguments that Pedro gives to justify his behavior valid, or is he just a madman unable to differentiate between good and evil? He will put forth his best arguments, the doctors will make their decision, but in the end the reader will judge him.

Luis Rivano has published novels, short stories and essays, serving as his own editor and producer. He is the author of the novels Esto no es el paraíso, El apuntamiento, El signo de Espartaco, Tirar a matar, among others; his plays include Te llamabas Rosicler and Escucho discos de Al Jolson, mamá. In September 2010 Alfaguara published a volume of his complete prose and in 2011 Rivano received the Seal of Excellence from the Chilean National Council of Arts and Culture.