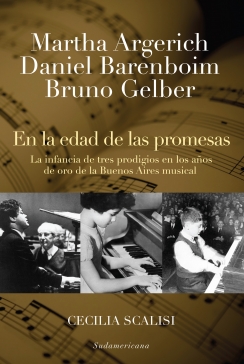 In the 40s and 50s, Buenos Aires was a great musical center frequented by the brightest stars from around the world. In that Golden Age, three children studied piano together and became true legends of classical music: Bruno Gelber, Martha Argerich and Daniel Barenboim. A journalistic chronicle and an intimate biography drawn from texts, first-person accounts and interviews, En la edad de las promesas recreates the enthusiasm of a society that enjoyed music in the unforgettable gatherings at Buenos Aires halls, on the radio and in the inimitable seasons at the Teatro Colón. Cecilia Scalisi rigorously builds a portrait that immerses readers in this dazzling era and the lives of these three geniuses of Argentine culture.

Cecilia Scalisi holds an art degree and extensively studied music in Córdoba, Buenos Aires, and Berlin. She lived in Germany for a decade, where she was a DAAD scholar, an author on Radio Deutsche Welle and a correspondent for La Nación. Today she is a music critic for that newspaper and a contributor to other foreign media, as well as the wife of a diplomat. She is the author of the book De padre a hija. Cartas de Alberto Ginastera a su hija Georgina.