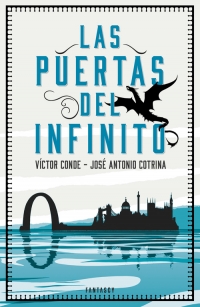 An aperimant is someone with the power to open a door between worlds, between different times and realities. Young Riddly is one of these creatures, and he finds himself in a ravaged London with the Ikari warrior race threatening to destroy the city from the backs of their dragons. Meanwhile, in the world of Collapse, Rebeca has gone from being sold as a slave to working as a disciple for The Locksmith, who sends her on all sorts of missions to gather pieces for a secret key. Both Riddly and Rebeca are unaware that their destinies are linked, and that they will be vital in the fight against many perils.

José Antonio Cotrina began his career as a science-fiction writer, a genre in which he won prizes including the UPC, the Domingo Santos and the Alberto Magno (three times). He then shifted to fantasy and young-adult fiction, where he established himself as one of the most talented, versatile and unsettling genre writers in Spain.

Víctor Conde is the pseudonym of one of the most famous authors of fantasy, terror and science fiction in Spain. Winner of awards such as Minotauro for his Crónicas del multiverso, he has published almost 30 books, including hits like Oniromante, Naturaleza muerta, Heraldos de la luz and Mystes.