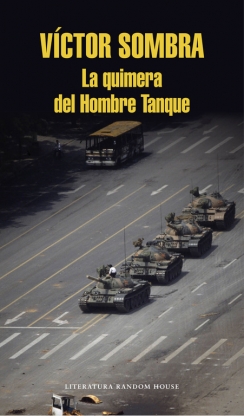 A political novel about the man who shocked the world when he stood up to armored tanks during the Tiananmen Square protests of 1989.

Breaking a quarter of a century of censorship, a group of Chinese leaders try to broadcast on TV a meeting between the two protagonists of the most iconic photograph of the Tiananmen protests of 1989. This audiovisual rewriting of the events will change the lives of a certain group of characters. Durry, a modern-day antihero, Communist member and activist, will head up the operation with an old Caspian oligarch and a member of the Chinese secret service. Together they will throw new light on the iconic Tank Man.

Víctor Sombra has published two novels with the Caballo de Troya imprint: Canje (2014) and Aquiescencia (2012) which are both set in Geneva, the city in which he has lived for over fifteen years. His latest novel The Tank Man’s Chimera is the first published by Literatura Random House.