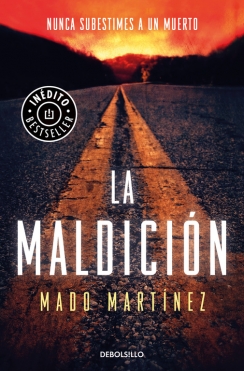 A horror thriller in the style of Stephen King, where no one is safe. There is no way of escaping the curse.

Apple Valley, California, 1950s. After a night on the town, Johnny and his friends are on their way home in a Cadillac along the lonely streets of the Mojave Desert when they hit what they think is a cactus. But looking back, they see the body of a little Native American girl lying on dusty ground. No longer moving. No longer alive.

Shocked and anxious, Johnny and his mates decide not to tell the sheriff of Apple Valley and simply drive away and try to forget what happened. But the dead never forget. The following morning, one of the guys who was in the car is murdered in the middle of the wasteland. He won’t be the last to fall. One by one, all those who ran way will be pursued. The curse has started. And no one can stop it until it gets its revenge.

A fast-paced start leads to a race against the clock that will absorb the reader until the very end. Its electric and hellish narration with short but impactful sentences is apt for the horrific content. Lightning strikes when we least expect it and the deaths are surprising and horrible. Likewise, the relaxed and colloquial tone of the narrator and protagonist, Johnny, gives the novel a certain wit and verisimilitude as well as a rationed sense of irony.

Mado Martínez (Alicante, 1979) lives in England. She has travelled and lived in lots of different countries and she has doctorates from the universities of Seville and Alicante. She is a well-rounded author of thrillers, science fiction and horror. In 2014 she won the prestigious Ateneo Joven de Sevilla novel prize with La Santa. She has also received other recognition in the fields of narrative and investigative journalism. She is the editorial director of Ispectrum Magazine. Her published works include La Santa, Colombia sobrenatural, La prueba y The Curse (La maldición).