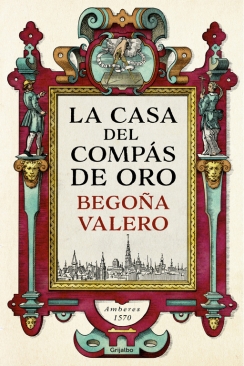 Begoña Valero
The House of the Golden Compass

A story of friendship, misfortunes, vengeance and adventure, based on the life of a real person and set in 16th Century Europe, the muddled era of the Wars of Religion.

From Lyon to Orléans, Paris and Antwerp, this is the story of Christophe Plantin, an apprentice who becomes a revolutionary master bookbinder, and later, the most important printer-editor-bookseller of his time. In an era of territorial conflicts and wars of religion, the craving for power and the fear of new ideas that spread around Europe turned men into wood for the bonfire. But the resolve of one man, ready to make his dream of spreading knowledge come true, will become the most exciting and dangerous adventure of all.

In the 1530s, the town of Lyon has become one of the key hubs of a new profession, book printing. Renowned imprints and smaller workshops display proofs of the books which they’re working on in their windows. If a passerby spots any mistake in the proofs, they are rewarded with a few coins. This is one of the reasons that drew Christophe Plantin, as just a young boy, and his best friend Pierre, to the small imprint of Mr. François Goular: the will to earn enough money to be able to buy a book. The main reason, perhaps, is Marie, the fifteen-year-old daughter of the owner whom Christophe is in love with. As much as she sees him as a kid, that doesn’t stop her from flirting with him, to the envy of Régine Fouché, an eleven-year old girl whose family lives opposite.

When the Fouchés’ livestock becomes ill, Régine accuses Marie of being a witch. This, together with Mr. Goulart secretly printing the work of one Martin Luther, leads to both father and daughter being captured and burned at the stake as heretics. Christophe has lost his first love. But another stays alive, one which is at least equally dangerous if not more so, and will be the driving force of his life and cement his place in history: his passion for books.

Christophe, a man who came from nothing, will be knocked down time and time again, escape death and find unexpected supporters, even though he will see himself chased by his past. It is a story of friendship between two antagonistic characters; one real, one fictitious, one a man of words, the other a man of action, one who will go down in history, the other who will tell it. The novel is narrated by Luis de Osuna, a Spanish soldier from the Army of Flanders, who will rescue Plantin from an ambush in Antwerp, and who we’ll meet in the second half of the book. Written for the mass market, this story follows bestsellers like The Physician by Noah Gordon.

Begoña Valero (Alicante) has a degree in Medicine and Surgery from the University of Valencia. She has written stories and short stories since she was a teenager. In 2012, she published her first book, El trabajo de los libros (Working with Books). The House of the Golden Compass is her next novel.