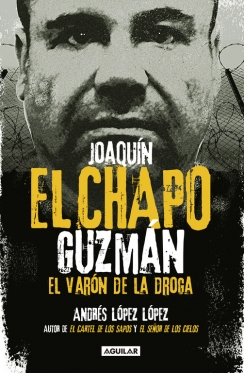 Who is the man behind “El Chapo”? Andrés López can answer that question as both an expert in narcotrafficking and as a fearsome former drug dealer himself.     López offers us a topical story of intrigue and revenge, inspired in the life of “El Chapo” Guzmán: his childhood, his obsessions, the alliances that allowed for his incredible rise in the drug world. Based on extensive research and written with great skill, this is a fascinating portrait of one of the most terrifying figures in narcotrafficking worldwide.   As a former member of the Cartel del Norte, López has written other books on this topic, like El Cartel de los Sapos ,which became a bestseller and was the basis of the television series “El Cartel,” which was the TV event of the year.

MÉXICO- Andrés López López (Cali, Colombia 1971) was a member of the Cartel del Norte del Valle, but he turned himself in to the Americans in 2001. From his cell, Andrés told his story and the stories of the other members of one of Colombia’s most dangerous drug cartels. His book El Cartel de los Sapos became a bestseller and was the basis of the television series “El Cartel,” which was the TV event of the year.

Since leaving prison, he works as a writer for both television and film.