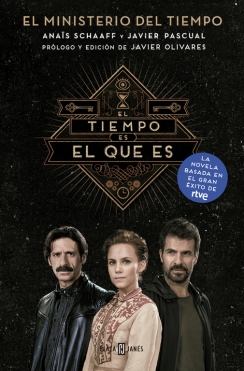 Anaïs Schaaff / Javier Pascual
Time Is What It Is

Three missions. Three time periods. And countless adventures with Lola Mendieta as the common thread. Welcome to Time Is What It Is. Sotoca is a high-level agent who was given up for lost years ago. Amelia, Alonso and Julián set out to the year 780 to rescue their lost colleague. After the medieval mission, the group ends up by mistake in 1603 in Cartagena de Indias. Just when it seems they have everything under control, Lola Mendieta is arrested by the Nazis in Canfranc for being an Allied spy in World War II. What at first seems to be a simple rescue mission gets more complicated, so much so that it imperils the final victory of the Allied forces over the Nazis.

Anaïs Schaaff started out writing for the small screen with Saber y Ganar and Los Lunnis, and for the series Ventdelplà on TV3. She has also written for the TVE shows Isabel, Víctor Ros, and La sonata del silencio.

Javier Pascual has worked in the fiction departments of Antena 3 and TVE. In 2013 he premiered his first feature film script, Viral, for which he was also the executive producer.