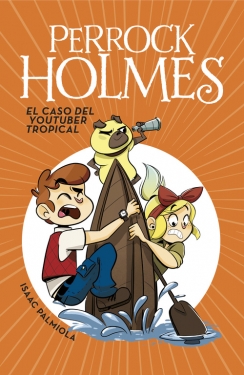 Isaac Palmiola
The Case of the Tropical YouTuber (Sherdog Holmes #6)

Julia and Diego love Wild Animal, the coolest YouTuber on the scene, who uploads homemade reports about dangerous animals. For some reason, he goes for over a week without uploading a video and everyone thinks he’s preparing something really spectacular. But no. When Diego finally gets the notification for a new video, he sees that it is Wild Animal’s grandmother who has recorded a video explaining that her grandson has disappeared and asking all his subscribers for help to find him.

Luckily, the best detectives in the Mystery Club are free and this smells like a mystery, doesn’t it?