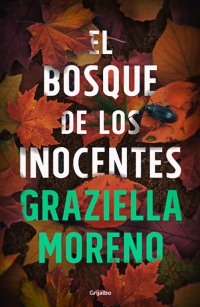 Graziella Moreno
The Forest of the Innocent

Violeta, a young lawyer from Barcelona, decides to spend a weekend in Roca Blanca. Taking refuge at her aunt’s house and seeing childhood friends will be the best remedy against the nightmares that do not let her rest. The first night that she sleeps in Roca Blanca she dreams about a dog that does not stop whimpering. But what she is not expecting is to actually meet that dog the next morning. There are lives depending on Violeta embracing these dreams as a part of her, and of the history of Roca Blanca. El bosque de los inocentes is a novel of intrigue in which family feuds intertwine with legend, in a mountain town covered by wisps of fog.

Graziella Moreno holds a law degree from the University of Barcelona. Since 2002 she has worked as a judge in the Justice Administration and is currently assigned to a Criminal Court in Barcelona.