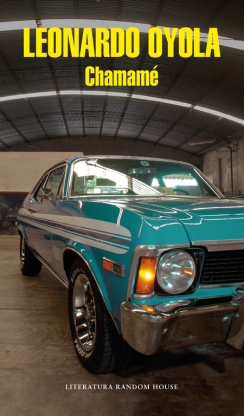 Leonardo Oyala constructs an extraordinary novel, full of twists and packed with action, that he narrates with an exquisite and accurate and prose that is as sharp as his characters.

Half western, half road trip, Chamamé (named after a folk music genre from Argentina) is a wild novel that tells the story of violence in the eye of a hurricane. The Dog and The Pastor are two ruthless criminals that take up arms to fight each other in a duel. It is a story of friendship, betrayal, revenge and love.

Originally published in Spain, it won the Dashiell Hammett prize for best crime novel during Gijon Black Week. With his vertiginous and visceral writing, Leonardo Oyola has showed that he is one of the most original writers of the Latin American literary scene.

“In this novel, Oyola delivers action, suspense and emotion in the same way as [classic western movies]. And he achieves all this with words and without special effects.” Walter Lezcano

ARGENTINA – Leonardo A. Oyola was born in 1973 in western Buenos Aires. His short stories have been selected for various anthologies and graphic novels in Argentina, Uruguay, Colombia, Mexico, Spain and France. He has published the Santería y Sacrificio novels, for the «Negro Absoluto» collection directed by Juan Sasturain, as well as Kryptonita, Siete y el Tigre Harapiento, Hacé que la noche venga & Bolonqui y Gólgota. En 2015, Kryptonita was adapted for the big screen by Nicanor Loreti and was a box-office success. In 2016, the channel Space premiered the series Nafta Súper which is based on the same book.