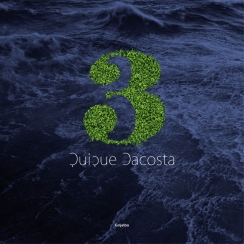 In this book, Quique Dacosta presents the recipes of his 2012 creations included in his “Taste of the Mediterranean” menu, which earned him his third Michelin star. Alongside the recipes he tells of the inspiration and motivation behind them and he reviews the story of the only restaurant in Spain, until that date, outside of Catalonia and the Basque Country, to receive three coveted Michelin stars.

Spain – Quique Dacosta (Jarandilla de Vera, Spain, 1972) started to work in what is today his restaurant, El Poblet (now known as the Quique Dacosta Restaurante), in 1988. Throughout his professional career, he has recorded his culinary creations in three books.