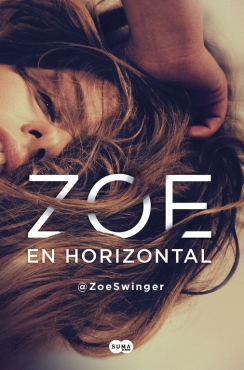 A newcomer to the world of swingers, with a free pass to a new sexual universe. Could love be open up beyond the confines of a couple? Could sex be a team sport?     Zoe had the regular life of a young woman: a boyfriend, a job, and friends. Then, everything takes an unexpected turn. She discovers that Javi, her conservative and possessive boyfriend, is cheating on her, after years in a relationship.   While riding the metro, she meets Marcos and is instantly drawn to him. After a few words, there’s no turning back. Marcos introduces her to a sexual universe that she’d considered taboo up until then. She’s not sure she fits into that brand-new reality, which frightens her and makes her reconsider all of her values. But almost without realizing it, Zoe becomes a swinger.

SPAIN – @ZoeSwinger, her Twitter handle, is the only name the author was willing to give. Her identity is hidden for personal reasons. Being a swinger is still taboo. Zoe tells us her story in the form of a novel based on her real experiences in the “horizontal” world of partner swapping.