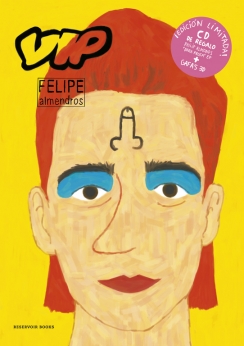 What happens when a young cartoonist can see his future? And what happens when an old, retired cartoonist travels back to his past? Felipe Almendros knows the answers and, in this book, he tells all in words and drawings. Felipe is an old man who lives in a strange place with a very young girl who’s forgotten his name. His only regret is not having published more comics after RIP, although he refuses to accept it. He is visited by a strange character disguised as Buzz Lightyear who will make him remember what his life was like right after he published his last comic and how he ended up living among prostitutes in a brothel called VIP.

Felipe Almendros is one of those true artists who leap into the creative abyss without a parachute. He is among the most highly regarded names in contemporary Spanish comics, with a refined and intimate artistic universe.