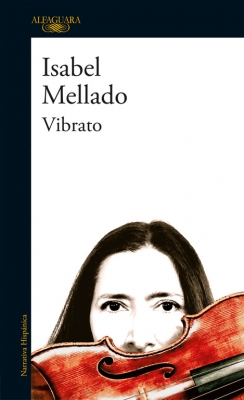 “Vibrato: a regular pulsation of sound, a slight variation in pitch, a negligible fluctuation, a beautiful inaccuracy in the accuracy of music.”

Clara is the oldest daughter of a couple of the Chilean resistance. When she is nine years old, her father is declared as missing by the authorities. A keen student of the violin at Santiago’s school of music, Clara grows up surrounded by music, violence and silences alongside a brother whom music and dictatorship have made mad and in the sole company of a skull called Gerundia. When she finally arrives in Europe to play for the Berlin Symphonic Orchestra, she’ll face unknown melodies about herself and about love.

Composed in three movements, Vibrato tells the protagonist’s story though her most intimate feelings and gives us an original introduction to her music, secrets and enigmatic beauty.

Isabel Mellado was born in Santiago, Chile. She is a violinist and a writer. Thanks to the Karajan grant, she moved to Germany 26 years ago to perfect her skills alongside the concertmaster of the Berlin Philharmonic Orchestra. She currently lives between Berlin and Granada. Her short story collection, El perro que comía silencio achieved great acclaim amongst readers and expert critics. She has been invited several times to the Guadalajara Book Fair (Mexico) and her works feature in anthologies in Chile, Spain, Mexico and Germany.