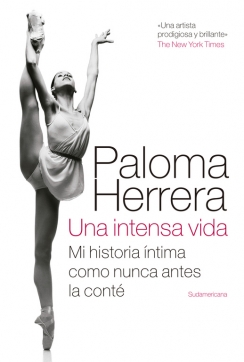 Paloma Herrera
An Intense Life: My Personal Story Told Like Never Before

“To be a ballet dancer, you have to have all sorts of physical strength but, above all, mental strength. Those who aren’t strong, even if they are very talented, don’t make it.”

You cannot address Paloma Herrera’s life without talking about her intensity and passion. Her career was like a rollercoaster. Between Buenos Aires and New York, the Colombus Theater and the American Ballet Theatre, she lived every minute as if it were her last.

She was the one who chose to start dancing at 7 years old and at 9 she was winning first prize in international competitions. At 15 she went to live alone in New York, hired by one of the greatest dance companies in the world. Her eagerness knew no bounds. But she was never fully satisfied with where she was at, even when her career grew at the same pace as her lively and creative energy. After retiring from the stage at 40, with a golden career to look back on, she became an example of the excellence, commitment, sacrifice and discipline needed to get to the top.

Now, for the first time, Paloma Herrera recounts it all: the backstage rehearsals, her personal struggles, her difficulties connecting with others, the problems her demanding personality created, the sacrifice of a life dedicated to dance and a body that shows the strains of hours and hours of training, her first kiss at the age of 26, her romances, the unconditional support from her family in the most challenging moments, what she had to leave behind to dedicate herself to dance and her unhealthy relationship with her first teacher, Olga Ferri, whom she admired enormously and said at one point was more important than her mother to her.

This is a book that talks about true callings, passions and the importance of sacrifice and following your dreams. It contains personal anecdotes and life lessons but also advice and the reflections, from a point of maturity, of a person who lived it all and got to a point with her career that she could have only dreamed of.

ARGENTINA – Paloma Herrera (Buenos Aires, 1975) is a dance icon, not only in Argentina but across the world. Throughout her career, she has won countless awards; she was considered one of the top ten ballerinas of the century by Dance Magazine in 1999 and one of the millenium’s Most Influential People by Time magazine and CNN. In Argentina, she received the Konex de Platino prize for the best dancer of decade. She was announced as an Outstanding Personality of the City of Buenos Aires in 2001 and was honored with an Immigrant Achievement award in New York. She has partnered, amongst others, Julio Bocca, José Carreño, Ángel Corella and Damian Woetzel. In 2017 she was appointed director of Ballet at the Columbus Theater.