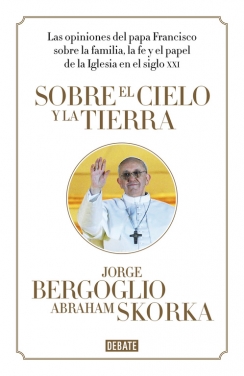 Sobre el cielo y la tierra (On Heaven and Earth) gathers a series of deep conversations between the Pope Francis, highest authority of the Catholic Church, and Rabbi Abraham Skorka, rector of the Latin American Rabbinical Seminary. God, fundamentalism, atheists, death, the Holocaust, homosexuality, and capitalism are just some of the topics tackled by these two huge mainstays of the religions that coexist in the world.

Born in Buenos Aires, Argentina, on December 17, 1936, Jorge Mario Bergoglio became Pope Francis on March 13, 2013, when he was named the 266th pope of the Roman Catholic Church. Bergoglio, the first pope from the Americas, took his papal title after St. Francis of Assisi of Italy.