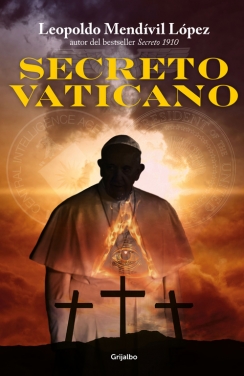 Pío del Rosario, Agent Sutano Hidalgo and Clara Vanthi, with the help of bishops and cardinals within the Vatican, go to explore the falsification of an entire part of the Gospels, the intentional distortion of the words of Lucía Dos Santos de Fátima, the assassination of Pope John Paul I, and the attempt on John Paul II’s life. The Secret Vatican also includes the control of the Vatican Bank by a secret coalition within the mafia, and an entity in the United States government to use the Vatican for covert money-laundering operations and for financing terrorism.

Leopoldo Mendívil López is a Mexican writer who was born in 1970. He studied Communication at the IberoAmerican University. He has worked as a publicist with Nautilus-Grupo Elektra, produced and written TV programmes for the presidency of the republic and has participated as a host in the TV series El otro México. He’s the author of Psi-Code, a novel about the scientific advances of the brain and the secret programs of the United States in brain matter, as well as the bestsellers Secreto 1910, Secreto 1929, Secreto R and Secreto Vaticano, all published by Grijalbo.