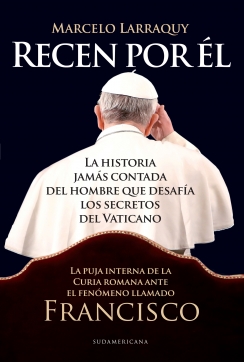 Marcelo Larraquy
Pray for Him

Who is the real Francisco and how will he be able to cleanse a corrupted, scandal-stained Vatican? The book begins with the report of Pope Francis’ coronation. As he takes his first steps into the Vatican, the problems, scandals, and secrets that torn the Church’s government and forced Benedict XVI to retire are detailed.