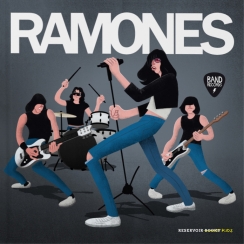 The Ramones explained for your children. The incredible story of four friends who became punk rock legends.

If there is a universal story about overcoming the odds, it’s that of the Ramones: four misfits from Queens who were successful without really knowing how to play an instrument. Their secret? A love for music and the culture of B-movies.

Joey, Johnny, Dee Dee and Tommy Ramone were the stage names of these four “brothers”. After leaving school, all that was left was for them to do was laze around, get into crime or start a rock band. They did all three at the same time. In hardly two years, they went from playing in shabby dive bars to recording their first album and filling the legendary Roundhouse in London in July 1976. The era of punk rock had begun.

The beginnings of the band, up till their industry-wide recognition, are retold in this book suitable for both adults and children.