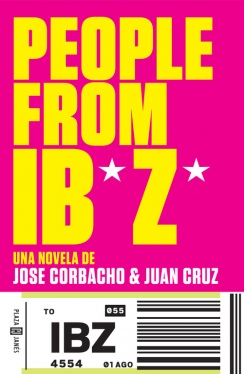 People From Ibiza is a surprising, fun, fresh novel told from varied points of view, in which different people travel to the “White Island” in the Mediterranean to spend a few days. They are all running away from their lives, trying to be someone else or, at least, to stop being themselves for a while. This is a deeply human, contemporary novel, in which the island’s supposed craziness seems to want to sweep up the characters.

In 2009, he and Juan Cruz directed the series Pelotas, for Televisión Española and produced by El Terrat. He co-directed the film Tapas with Juan Cruz, which received the Malaga Film Festival’s award for Best Film, as well as the Audience’s Prize, and was awarded the Goya for Best First Film. His second film was Cobardes.

In 1995 he directed his first short, La Bula, and four years later, El Olor de las Manzanas, which won the Barcelona’s Europa Prize for Short Film. That same year he joined the El Terrat production company. In 2005, along with his friend Corbacho, he wrote and directed Tapas. They also codirected the television series Pelotas, and the film Cobardes.