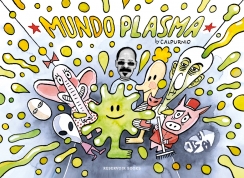 Winner of the 2016 City of Palma Prize for Comic   Independent, absurd stories that happen on Earth, and beyond, among microscopic creatures who run through all the storylines and introduce new threads. Despite this, it all has something very real about it.   Calpurnio, one of Spanish comics’ most important authors, bucks his minimalist style to take us to a quite unusual world. Calpurnio employs the grotesque and the surreal to throw readers off kilter while at the same time he keeps them savoring every page.