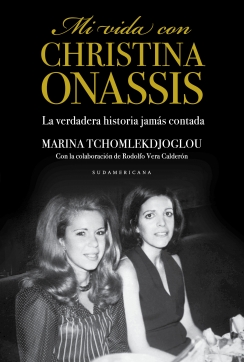 November 19th 1988 was the last time Marina saw her close friend Christina Onassis, who was only 37 years old. They had dinner at her home in the Tortugas Country Club and Christina was radiant. The next day they found her dead in the bathroom. Twenty-six years after her death, Marina has now decided to pay her homage with this book. Mi vida con Christina Onassis reveals the best-kept secrets of one of the most important heiresses in the 20th century, the daughter of magnate Aristotle Onassis. Covering their friendship since 1966 up to Christina’s emotionally fragile final years, this untold biography is a loving portrait of one of the richest women in history.

Marina Tchomlekdjoglou, formely known by the last name Dodero, had a privileged education at Cygnets House, one of the most exclusive schools in Great Britain. There she rubbed elbows with the current Queen Saleha of Brunei, and princesses Manon de Hohenlohe-Schillingsfürst and Beatriz de Borbón-Dos Sicilias. In 1966 she met Christina Onassis and from then on they were never parted.