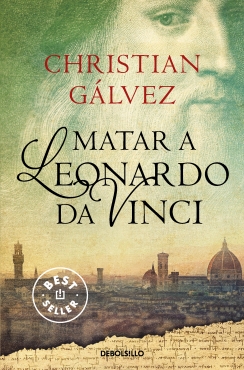 A historical thriller that combines art, revenge and passion. All admire the genius, but few actually know the man. A novel that grips the reader from the beginning and changes the opinion he had of the Florentine virtuoso up until now.

“Meser Leonardo da Vinci has such a heretical point of view that he doesn’t abide by any religion and wishes to be a philosopher more than a Christian. Therefore, the solution is clear and solid: we have to kill Leonardo da Vinci.”

Europe, 16th Century. While Spain, France and England finalize their unification, the Italian states see themselves caught up in long-lasting conflicts of religion, power and the hunger for territorial expansion. The only thing that unites them is the cultural Renaissance of the arts. In the Republic of Florence, governed by the Medicis, epicenter of the artistic rebirth, an anonymous friend accuses a young, up and coming Leonardo da Vinci of sodomy. Over two months, he is interrogated and tortured until the intervention of one Lorenzo de Medici. Known as the Magnificent, the de facto ruler lets Leonardo da Vinci regain his freedom. With a damaged reputation, Leonardo leaves for new horizons to demonstrate his talent and ease the psychological impacts of prison. However, his enormous talent and the growing recognition of his works will not be able to placate his thirst for revenge for the torture he received. From then on, the search for the identity of the anonymous informant and the unforgettable memory of his jail time will intermix with the artistic achievements that will end up dazzling the world. Who accused him? With what motive? Whilst debating between escape and revenge, Leonardo will discover that all is not what it seems when it comes to being successful – until a new threat looms over him, this time an unequivocal one: “Kill Leonardo da Vinci”.

Exhibiting an exquisite and thorough documentary style, the fruit of several years of research and trips to the emblematic settings of the maestro’s life, Christian Gálvez builds a historical thriller; an adventure novel of art, revenge and passion.

Reaching its fifth edition with more than 50.000 copies sold, just in Spain, it combines the historical thriller with adventure novels in the style of Dan Brown and Alexandre Dumas.