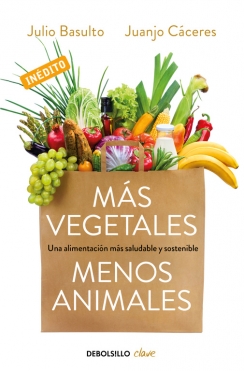 There is a wide consensus in the scientific community that a healthy diet should be plant-based. However, the adoption of dietary guidelines that partially or completely exclude animal products is considered to be merely an ideological choice that lacks any scientific basis. This book evaluates from different perspectives beyond vegetarianism, the wide-sense benefits derived from adopting plantbased eating habits, offering the possibility for readers to identify with three large groups of dietary options: veganism, ovolactovegetarianism, and various types of plant-based diets which do not entirely exclude all animal products.

Julio Basulto (Barcelona, 1971) has a degree in Nutrition from the University of Barcleona. He has been a teacher, editor and investigator in he field of nutrition and dietics. Now he teaches in several institutions and is the author of various scientific publications.

He’s the coauthor of No más dieta and Secretos de la gente sana alongside M.ª José Mateo, and of Comer y correr and Más vegetales, menos animales alongside Juanjo Cáceres. On his own he has published Se me hace bola and Mamá come sano.All of his works have been published by Debolsillo.

Juanjo Cáceres has published many articles in magazines, and has written some books on the analysis of consumption. He is the co-author of Consumidor, comensal, ciudadano, Cuines en migració, Comer y correr and Más vegetales, menos animales.