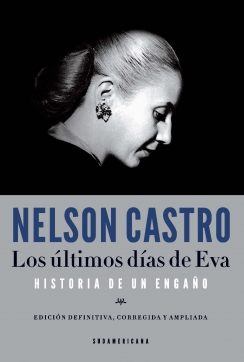 Based on testimonies from nurses and hospital staff, medical records, secret archives and interviews with the Argentine and foreign doctors who treated Eva Perón’s cancer, Castro has written a book whose ambition and complexity go beyond mere journalistic investigation. This book is a painstaking and readable reconstruction of how the uterine cancer that led to the First Lady’s death was detected and treated. The value of the unpublished materials the author found and the pacing of his prose make Los últimos días de Eva a medical thriller, a novel about journalistic inquiry and an exemplary chronicle of how the Peronist government crumbled as the health of its most charismatic leader failed.

Nelson Castro is a journalist and physician. He is a columnist at the newspapers La Nación and Perfil, and a host of the cable television program El juego limpio, on Todo Noticias (TN), and the radio shows Primera Hora and Entre Líneas, both on Radio Continental. He has written La sorprendente historia de los Vicepresidentes argentinos, Enfermos de poder and Los secretos de los últimos días de Perón.