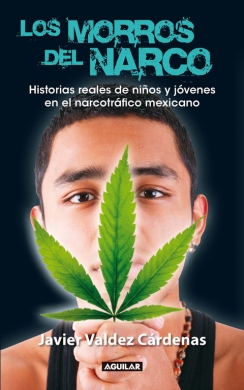 The number of children and young adult who are actively involved in drug trafficking in Mexico is increasing. Kid from 13, 14,15 years old and up to 21 or 23 years of age, act wildly and with fierce courage in uprisings, assassinations, beheadings, drug transport and kidnappings. This book shares real stories of these events.

Javier Valdez Cárdenas offers the portrait of a bloody and uncontainable reality: the voracious narco war in Mexico, seen from the actions and sequels of children and young adult who have integrated themselves into narco by their own will, dazzled by money or dragged into the struggle between assassins and the federal army, narcos against state police, not to mention the clashes between drug traffickers struggling to dominate the drug business.

Countless are the testimonies of reporters and photographers who cover the news of drug trafficking, who warn about the growing participation of adolescents in these tasks of crime and barbarism. The great value of Los morros del narco lies not only in the way in which he goes deep into the heart, the memories and the illusions of these violent human beings, thirsty for wealth and power, but in the way in which he discovers in these assassins and addicts to marijuana or cocaine, in these indomitable and savage narcos, a past where the lack of love and affection, the misery and the hunger have left bullets in their souls that no one will ever be able to get out.