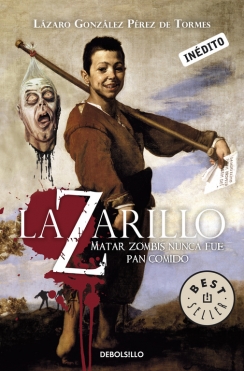 The true story of Lázaro de Tormes: a first-person account of one of the main figures in the fight against the zombie plague that devastated Spain in the 16th century. A book that brings new meaning to the expression “take a bite out of life.”   What led to the decline of the greatest empire this planet has ever known? Why has it been kept from us –until now—that there was an epidemic of the living dead that ravaged Spain, a country crawling with souls from beyond the grave?   Now, in the 21st century, a mysterious man who seems to have come from the past once again faces the plague of zombies that devastated Spain in the 16th century. Could it be that Lázaro de Tormes, the most famous character of Spanish literature’s picaresque genre, is an immortal? Until now we have only known about part of his life, but in this book his bloody past, everything they never taught you in school, is fully revealed. We present here, finally, the true story of Lázaro de Tormes, told in his own words. From how he learned the secret laws of nature –the resurrection of corpses—to how a mysterious bloodsucking maiden fell in love with him, and how our little hero enlisted in a strange paranormal squadron to fight against the hordes of demons that had come back to life.

SPAIN – Lázaro González Pérez (1502-?), a native of Tejares, Salamanca, is the full name of the

character we all know as Lazarillo de Tormes. In 1552, if not before, a spurious version of his

life story found its way to the printing press, supposedly told by him in the first person, in a

volume entitled The Life of Lazarillo de Tormes. Now, five centuries after his birth, readers the

world over will finally learn his true story.