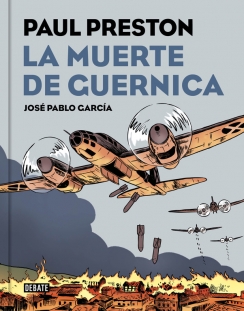 Guernica was the first civil target bombed by a modern war in the 20th century. Thanks to the powerful images of José Pablo García, this history hits the reader twice as hard     The attack on the Basque city of Guernica on the 26th of April, 1937, is burned into the European conscience: it was the first “open” city that was practically obliterated during a bombing carried out by the Nazi Condor Legion. The atrocious attack came on market day, three hours of bombs and strafing from low-flying planes, and was later the subject of a terrible manipulation campaign.   Following the success of the comic version of The Spanish Civil War, young illustrator José Pablo García returns with an adaptation of another brilliant essay by Preston, The Destruction of Guernica, offering readers the graphic version of the history of that infamous bombing.

José Pablo García (Málaga, 1982) is an illustrator and comic-book artist. In April 2015 he published Las aventuras de Joselito, his first book as both illustrator and writer.

Paul Preston (Liverpool, 1946) is the director of the Cañada Blanch Centre for the study of contemporary Spain at the London School of Economics & Political Science.