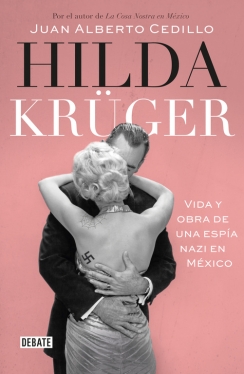 Juan Alberto Cedillo
Hilda Krüger. The Life and Work of a Nazi Spy in Mexico

Admired by Joseph Goebbels, the attractive, sophisticated German actress, went to USA and Mexico to continue her career, while obtaining key information for the Nazi regime.       This is the novelized story of Hilda Krüger starred in one of the most curious episodes of the mid 20th century. Joseph Goebbels, Hitler’s powerful and sinister Minister of Propaganda, sent her to the United States with the apparent intention of continuing her career in glamorous Hollywood. Later on, she headed to Mexico after intense relationships with magnate J. Paul Getty and Gert von Gontard, the heir to the Anheuser-Busch beer emporium.   In the Mexican capital she had to win the favor of well-known politicians, primarily Miguel Alemán, Secretary of the Interior under Manuel Ávila Camacho and likely presidential candidate. Few knew the beautiful actress’ veiled objective: obtaining key information for the Nazi regime.

MEXICO – Juan Alberto Cedillo (Mexico City) studied History at the Universidad Autónoma in Nuevo León, where he currently lives and works as a journalist. He has devoted the last few years to researching little known facts about his country.