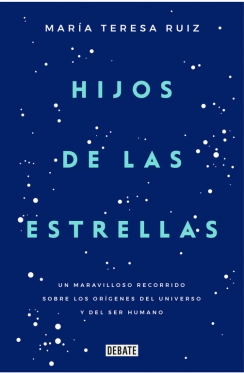 A simple, highly readable overview of the fundamental facts of our universe, written by one of the most prestigious scientists in the world.

Where do we come from? Where are we? What are we made of? What are stars? How are they born and how do they die? Where do they get the energy to shine? This is a summary of everything we know so far and how we found it out, from the Big Bang to the accelerating expansion of the universe. This is a fascinating story that answers those ‘useless’ questions, many of which point in the direction of the star and where the elements that living beings are made of began.

CHILE – María Teresa Ruíz (Santiago de Chile, 1946) earned her undergraduate degree in Astronomy in Chile, and then her Master’s and PhD at Princeton University. She is a professor of Astronomy in the Physical Sciences and Mathematics Department of the University of Chile, where she has been the chair. She is the director of the Center for Astrophysics and Associated Technologies (CATA). She has published more than 200 scientific articles internationally and five books about astronomy for the general public and for children and young adults.