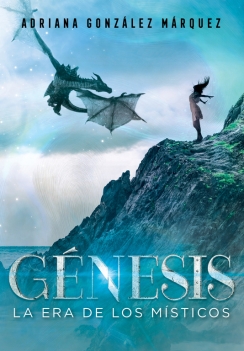 Génesis is the second book in the Age of the Mystics.

The attack of the Mystics is imminent, but the guardians now have new alliances, like Ramel, the only dragon who seemingly does not want to eliminate all the humans. Further, they know that, for a new era to emerge, it is sometimes necessary for things to die, and this is a sacrifice they are willing to make.

Adriana González Márquez was born in Aguascalientes, Mexico. She wrote her first story at the age of twelve, but she thought it was so bad that she opted to destroy it. Several years later, her narrative efforts proved succesful in the publication of the trilogy The Power of the Black Onyx from which she gained countless readers who have travelled with her to a world full of fantasy, adventure and romance. Electrical storms fascinate her, she still hates getting up early and she’s not as foul-mouthed as before. She is now writing the second part of her new trilogy, The Age of the Mystics.