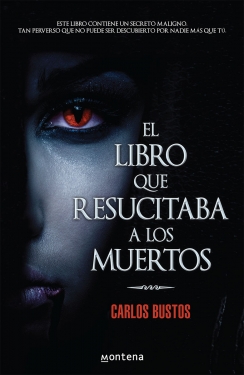 Carlos Bustos
The Book that Resurrects the Dead

A lonely and book-loving student, Alain Poel, discovers a book in his school library which has the power to resurrect the dead.

Not having many friends, Alain Poel is irresistibly drawn to books. The lonely young boy has hardly any contact with his parents and has to cope as well as he can in a hostile school environment, until he meets his school’s eccentric librarian who introduces him to a world of mysterious and prohibited manuscripts. There, on accident, Poel will discover the darkest of them all: the book that will be used to resurrect the dead on Judgement Day.

When a series of spooky events foretold by the book start to happen, Alain Poel will have to face the greatest challenge of his life: getting to the bottom of the mysteries hidden in the dark book and trying to survive a catastrophe of unseen proportions. The fate of humanity lies in his hands.