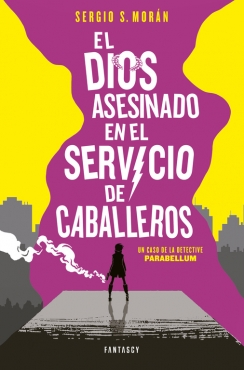 Sergio S. Morán
The God Murdered In The Men's Toilets

A funny and mysterious underworld develops in Barcelona. Among common people with their ordinary lives, detective Veronica Guerra will try to avoid a war between gods.  It says “you have the corpse of a god in your trunk” on the left arm of detective Veronica Guerra, alias “Parabellum.” She wrote it herself a few hours ago, but she can’t remember when or how. She doesn’t seem too worried about that: she’s a paranormal detective and not easily impressed by the cadaver of a murdered Greek god in her car. She’s seen stranger things. The problem is that after that corpse comes a robbery, a network of drug traffickers, and two divine factions about to go to war in a soccer stadium in the middle of Barcelona. Veronica will have to face centaurs, paparazzi, vampires, soccer players, ghosts and leprechauns if she wants to solve the case.

SPAIN – Sergio Sánchez Morán (Reus, 1984) studied Computer Engineering but soon switched to drawing. He’s worked as a comic writer for the magazines El Jueves and Orgullo y satisfacción. He is one of the pioneers of online comics in Spain as the creator of ¡Eh, tío!, which has been going strong for more than ten years. He also writes El Vosque, a comic about drunk fairies and murders that has thousands of readers both digitally and on paper.