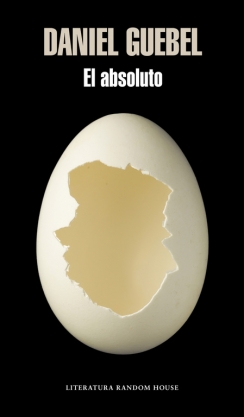 Six generations in a family of thinkers, artists, and politicians whose works and deeds are crucial to understanding the cultural and political events of our era. Starting with the biography of Frantisek Deliuskin, a Russian musician, in the 18th century, The Absolute narrates the story of his son, Andrei. His annotations in the margins of Saint Ignatius of Loyola’s Spiritual Exercises will serve as inspiration to Lenin in the Russian Revolution. He then travels to Egypt with Napoleon and reveals the secret of the Rosetta Stone to Champollion. Next goes Esaú, who tries to build a revolutionary utopian society and the story of his twin sons, one of whom is Alexander Scriabin, a theosophical composer who came up with a musical system to cosmically modify reality. The final character invents a time machine to travel back to the beginning, reviewing his family history, while searching for the secret to immortality.

ARGENTINA- DANIEL GUEBEL published his first novel when he was 31 years old: Arnulfo o los infortunios de un príncipe (1987). Since then he has written more than twenty books including story collections, novels, plays, and scripts. He spent more than six years writing The Absolute. At present, he works as a book publisher, focusing on journalistic research. He is also the events editor for Perfil.