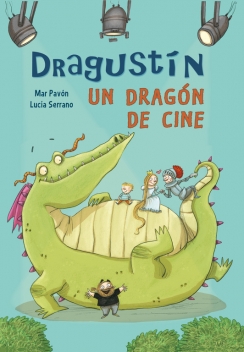 Dragustín was happy living in his comfy cave, but lately he was feeling pretty bored... He’d been doing the same thing every day for many years, like scratching at the roof with his claws every time he stretched in the morning, drinking his tea at 5 and watching his favorite TV program at 10. He needed some fun for a change! One morning, an ad in the newspaper caught his eye: “Actor needed to play the role of a dragon in a film. Applicants should come to the casting call this afternoon at 23 St. George Street.” He wasn’t an actor, he thought, but... couldn’t he play the part of a dragon a lot better than any human actor? And since the answer was a “YES” almost as big as him, he didn’t hesitate: he would go to the audition even though it meant missing his 5 o’clock tea time for the first time in a very long while!