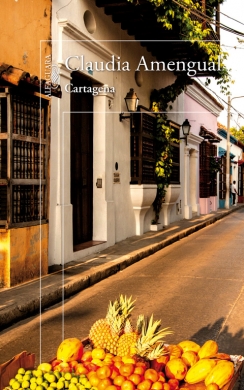 A man in the throes of a mid-life crisis makes some bad decisions that bring dreadful consequences. Thirty years later, wracked by guilt, he returns to Cartagena de Indias to fix some of those errors, figure out the deeper motives behind his actions and ask for forgiveness from those he hurt so badly. He travels with his almost ninety-year-old father, Franco Rossi —an embittered former journalist— and comes across a man he believes to be a character out of a Gabriel García Márquez novel. Later on he encounters the aging Nobel prize-winning author himself. In this tribute to the magic universe of Gabriel García Márquez, Cartagena sets forth a dialogue with the genius writer’s texts, posing questions on the value of originality in art, the destructive power of guilt and the possibility of redemption.

Claudia Amengual’s stories have been anthologized internationally in Schiffe Aus Feuer 36 in Germany and Les bonnes noubelles de l’Amérique latine in France. Desde las cenizas won the 2006 Sor Juana Inés de la Cruz Prize, awarded by the University of Guadalajara and the Guadalajara International Book Fair. She was selected by the jury of Bogotá39 and the Hay Festival as one of the finest younf writers in Latin America.