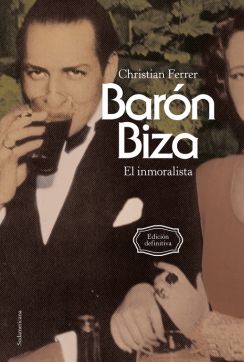 In this biography, Christian Ferrer sheds light on the darkest myth of Argentina’s twentieth century. A biography of the Argentinian writer and politician Barón Biza (1899-1964), the son of millionaires, whose work is an exaltation of pornography and crime, and who committed suicide after throwing sulfuric acid in his second wife’s face. He spent time in prison, and his most famous book The Right To Kill is a very singular work that marked him as “immoral” and is considered one of the “accursed works” of Latin American letters. The Argentinian government confiscated the first printing of 5,000 copies and accused him of obscenity. Both his ex-wife and his son also killed themselves after his death.

Christian Ferrer forms part of the editorial board of the magazines El Ojo Mocho and Artefacto, and is the editor of Sociedad. He has published Mal de ojo. Ensayo sobre la violencia técnica and edited Prosa plebeya, El lenguaje libertario, and Lírica social amarga.